Whether or not you have a trip to Edinburgh planned soon, here is a little guide I put together of things I did in my 72 hour trip! It’s a city full of beautiful views, the seaside, literary history, and free museums!

I flew to and from Edinburgh on Norwegian Airlines from the Providence airport. They are a super cheap airline company and I had a really great experience with them. The flight on the way there was super packed, but on the way back was so empty I had an entire row to myself! I definitely recommend checking out where Norwegian flies to (all over Europe from major US airports) because their flights are direct and the price can not be beat. I will definitely be flying with them again.

Edinburgh is a relatively easy city to get around by walking, but they also have an amazing bus system! This was the first time I had seen double decker buses and I was in looove. I felt like I was taking the Knight Bus like they do in Harry Potter.

Pro Tip: Make sure you have cash to ride the buses – they require exact change, so either buy a day pass for about 4 GBP or have cash on hand to drop 1.70 GBP into the little machine.

I had to wait for a bus and then had to get off because I didn’t have exact change, so don’t be like me and plan ahead!

One of the most amazing things for me personally about Edinburgh is that it’s the city that JK Rowling wrote Harry Potter in!

I’ve been obsessed with Harry Potter since a young age. I read the books when I was 6 or 7 and it’s always been my source of magic and inspiration.

Edinburgh is the birthplace of many other famous writers like Robert Louis Stevenson, Muriel Sparks, and JM Barrie, which is so exciting for my nerdy literary self.

The entire vibe of being in Edinburgh just made me feel like I was IN Harry Potter and I got to visit the cafe that she WROTE Harry Potter in: The Elephant Cafe. I got a lil cup of hot chocolate and felt so cool being in a place where literal MAGIC was born.

Also this street was the inspiration for Diagon Alley, and since I’m a sucker for cute colored buildings, it was easily my favorite street. 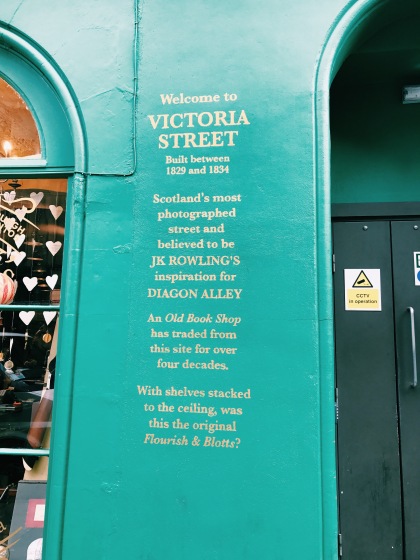 There were even lots of shops dedicated to Harry Potter, like this book store, and an entire Harry Potter fan merchandise store.

I had to walk through Victoria St. on the way to the hostel I stayed at, Kick Ass Hostels, which I loved. 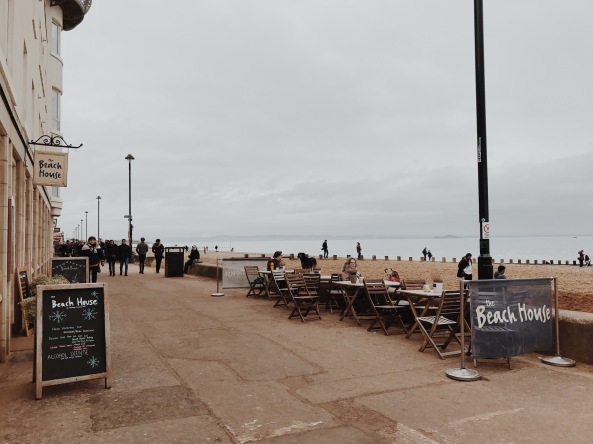 Being a merm, I of course had to visit the seaside! The major port city is Leith, but I instead went to Portobello which is about 20 minutes south.

It was a lovely little walk and I imagine it’s very nice in the summer. There were people riding bikes along the boardwalk, and lots of families and dogs running around.

Something that struck me was the color of the sand! It was much darker than any other sand I’ve seen, and even though the day was overcast, it was still beautiful. 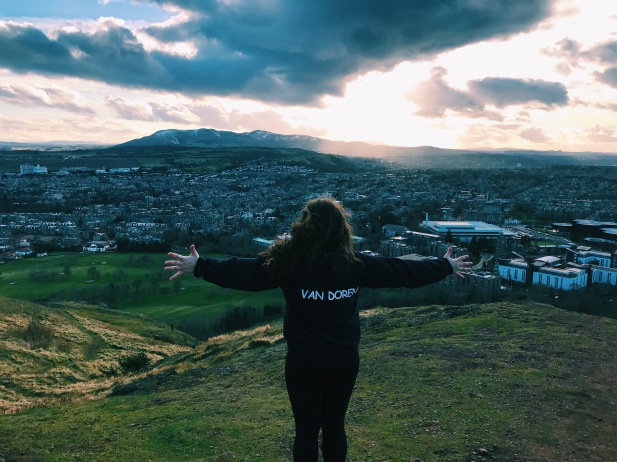 If you want to see some of the BEST views of the entire city, then you must climb up Arthur’s Seat.

There are several different trails to take you up, differing in level of difficulty. I’m pretty sure I took the most difficult path, because it was just a straight incline of stairs, but it took the shortest – only about 20-30 minutes.

To be honest, I was shocked at how steep it really was. Everyone had said it was a moderately easy hike, but those stairs were KILLER, but the view was definitely worth it.

I stayed up there for several hours. It was super cold and windy, but I wanted to catch the sunset, so if you go up there, make sure you have warm clothing (although I imagine in the warmer months, it’s fine).

If you’re looking for more historical sights and great views of the city, visit Calton Hill. Just like Arthur’s Seat, it is a dormant volcano and has a few different monuments to learn and read about that are important to Edinburgh’s history!

A perk of going to museums in Edinburgh is that they’re all free! I went to the National Museum and the National Gallery of Scotland. The Gallery had some beautiful paintings and the interior of the Museum was so gorgeous. They had a lot of interactive exhibits so it would be fun to take little ones here!

I can’t talk about a trip to Edinburgh, without mentioning the major castle that is visible from practically anywhere you go in the city.

It’s again, built on a dormant volcano and is looming in size. I actually paid the $25 ticket to explore inside and see some crown jewels. It was very crowded when I went and it felt like you could only go in a couple rooms, I was thinking – but what about the rest of the castle, it’s huge!

If you’re interested in history and royalty then definitely check it out, but if nothing else, it’s worth it for some more amazing city views.

It’s funny, I was walking around at night and I didn’t feel like I was in a foreign country at all. I felt very at home and thought “I very well could be walking around in San Francisco or something right now” and then I looked up and saw the giant castle lit up from underneath and I was like – Oh, right except we’re surrounded by castles here. Yup, I’m definitely not in America anymore.

This city blew me away with it’s history and beauty, but also it’s ability to feel very contemporary and modern!

It definitely reminded me a lot of San Francisco because of the seaside and all of the hills!

I’d love to come back here again in the summer for the Edinburgh Fringe Festival.

One thought on “City Guide to Edinburgh, Scotland”