Dublin, Ireland is a city full of flowers hanging from windows, pubs with plenty of beer to go around, and is surprisingly rich with artistic and literary history.

I spent a little over 24 hours in this charming city and had a fulfilling and relaxing time.

I chose to go to Dublin, purely out of convenience. I wanted to go to Portugal, but it was actually cheaper to fly to Ireland first and then fly from Ireland to Portugal. I flew into Belfast, Ireland in the North and immediately took a 3 hour bus ride to Dublin (in which I slept the whole time).

I stayed at the Abbey Hostel which was in the center of the city. It was so cute and “hip” and the staff were really kind and helped me print my boarding pass for my next flight so I didn’t have to pay extra.

It was easy to find and just a short walk from the bus station. I would definitely recommend it for people who like to stay in the center of things happening! (and their breakfast was pretty good)

I didn’t know much about Ireland’s artistic and/or literary history and I was pleasantly surprised to stumble upon their “Icon Walk” that portrayed different figures throughout Irish history. Their was a heavy focus on women in history, since during the times when the Catholic church controlled Ireland, they would ban a lot of women writers so it was illuminating to read about these strong, fierce, early feminists who lived in a time that suppressed their artistry and voice. I had a great time exploring the streets, reveling in the street and wall art and feeling like I was learning so much about the place I was in.

When I was on the way to finding my hostel, I stumbled across the Abbey Theater which is Ireland’s national theater. I didn’t have many plans for the day and their was a show that evening 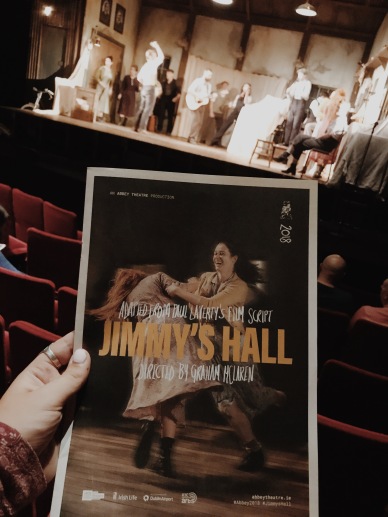 so I of course bought a ticket for that evening. It was close to 37 euro, which is pricier than I usually spend on tickets, but it was definitely worth it to experience some theatre and culture.

The show I saw was “Jimmy’s Hall” which is a true story about a man who created a dance hall at a time when dance halls were illegal because of the Catholic church as a place for youths to express their creativity. He eventually gets caught and the city burns down the dance hall and then controversially deports him to America even though he was a born Irishman.

Again, it taught me a lot about Irish history and I loved listening to their accents and watching them dance. It was well worth it.

One of my favorite things about exploring a new city is of course, food. There were quite a few donut shops in Dublin, which is amazing because I love donuts. There seemed to be quite a few healthy salad places and cute, trendy restaurants that sell the ever famous, avocado toast. Ever since my trip to Edinburgh, I was obsessed with doing high tea with scones and clotted cream. Mouthwatering. I found a great place on Yelp called Queen of Tarts and had a delightful time savoring my scone and mint tea. Would definitely recommend it for great tasting desserts and scones!

Other notable things that I did in Ireland was go to Grafton St, a place lined with street performers and shops.

Trinity College‘s campus is of course the place to be if you want to check out the Book of Kells and the huge Harry Potter looking library. I didn’t have the patience to wait in the long line to see it, so instead I hung out on the college green with many other people relaxing and read and napped in the sun. It felt so nice just stepping on a college campus again and feel the energy of that environment. Something I’ve missed, for sure!

Temple Bar is the iconic bar in Dublin. I didn’t stop inside, but of course had to take a touristy pic. My favorite part about it is the lovely flowers hanging from the window!

Dublin Castle is cool to check out if you like all things royal! I had this crazy experience while I was exploring their courtyard, because I felt as if I had been there before. I suddenly had this realization that I was definitely royal in a past life. Maybe I was an Irish princess or an English queen, who knows, but in that moment I knew it to be true. I am descended from royalty. It might sound lofty or too woo-woo, but I definitely felt like my soul had known those lands. Very interesting.

I did not check out the Guinness Factory because I don’t really have an interest in beer, but I know a lot of people like to do that while visiting Dublin.

Since Dublin was merely a stop on my way to my actual destination (Portugal) I didn’t do anything too crazy adventurous, just simply walked around the city exploring it and had a really great time doing so! I was definitely inspired by the theater I saw and all the bookstores I went in exploring some of Irish’s rich literary history.

Have you ever been to Dublin? What have you seen/done?